The Joys of Revision 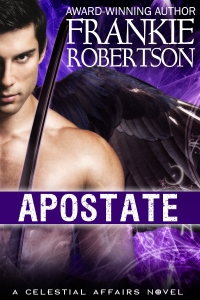 A while back I told you that I was about a third of the way through APOSTATE, Book Three in the Celestial Affairs series. I was sure at that time that I’d be closing in on finishing the 1st draft by now. Not so. I am, in fact, at about the halfway mark.

Why so slow? In addition to me not ever being a fast writer, I kept getting this nagging feeling that something wasn’t quite right. I learned the hard way with FORBIDDEN TALENTS to listen to that voice. (It took me six months to figure out what was wrong with that book.) So I went back and revised. And pondered. And revised some more. As a result, I think APOSTATE will wind up being a better, more layered book, but it also won’t be released until early next year. (Here’s the cover, by the incomparable Jaycee DeLorenzo of Sweet N Spicy Designs.)

Some of my ponderings have led me to research PTSD, Domestic Abuse, and terrorism–and I’m not done yet. So wish me well, and I hope that when you finally read APOSTATE you think it was worth the wait. (And in the meantime, you can read books one and two if you haven’t already: LIGHTBRINGER  and GUARDIAN, as well as the “sidecar” novel BETRAYED BY TRUST.)

This site uses Akismet to reduce spam. Learn how your comment data is processed.