Francesca Rose is the pseudonym under which I write  the Victorian Secret Romance stories. Inspired by fairytales, mythology, and cryptozoology, they’re sexier romances that explore the transformative power of love.

Sometimes Unexpected Gifts are the Best. . .

It’s almost Christmas, a time of joy and family gatherings—but not for Jayne. Forced to flee her home, Jayne seeks anonymity in the crowded streets of Victorian London. Desperate and alone, she accepts a surprising invitation from a wealthy woman who employs a Yeti as a footman—whom Jayne finds unexpectedly attractive.

Milann likes the little human female from the moment she runs into him—literally— outside the glove shop, and is pleased when his employer offers her a position. Despite being gently reared, Jayne gets along well with everyone at Paulette’s Tea Room—educated and low-born, Yeti and human alike. Yet even amidst the holiday bustle of shopping and decorating, Milann becomes aware that Jayne has a secret weighing on her.

Can he convince her to let him within the walls of her guarded heart? Can she accept the gifts he offers, and welcome a happily-ever-after that’s very different from any she ever imagined? 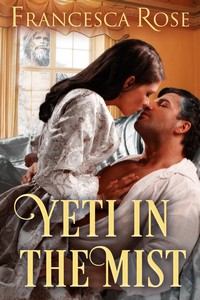 Catherine Denton loves her ailing husband and is taken aback when he encourages her to take a lover. Reginald, formerly a colonel in the East India Company Army, wants his young wife to have what he cannot give her: children―and his titled brother, Cedric, has offered to oblige. However, her brother-in-law is not the man Catherine desires. The male who makes her pulse race is Reginald’s good friend Yolann, the Yeti who served with him in India―and who sleeps just down the hall.

Neither Catherine nor Yolann want to betray their loyalty to the man they love and respect. Neither can deny their desire.

This book contains scenes reflecting the physical expression of love. It is intended for adult readers.

A SENSUAL VICTORIAN BEAUTY AND THE BEAST

Elise Craft is a well-bred Victorian lady who prefers studying the flora and fauna of England to playing the social games of the ton. She’s convinced herself that’s enough–even though she secretly longs for a lover who will cherish her.

Against her family’s wishes she travels to a remote area to indulge her interests. There, she stumbles upon the border between everyday England and Faerie where she makes a surprising, and sensual, discovery.

WITH HEART TO HEAR is a 40 page romantic fairytale containing scenes of magic and sensual affection. It is not appropriate for young readers.

“Ms. Robertson combines a lush prose style with a sharp eye for characterization and detail. You will not be disappointed.”
~ Jody Wallace, author of Pack and Coven, A Mage By Any Other Name, and other works.